How Does Craigslist Make Money – Everything You Ever Wanted to Know

Its design is simple, its ads are virtually non-existent, and it’s virtually free to use, yet Craigslist routinely posts earnings in the multi million dollar range. This begs the question “how does Craigslist make money?” As it turns out, they have a pretty clever way of raking in the cash without anyone being any the wiser and turning it into straight cash with a few old, simple business tricks.

When you’re asking “how does Craigslist make money?” you have to think about the site as a whole, not just the portion of the website you interact with. Even if you’re active in a number of sections of your local Craigslist, from job postings to personals to community forums, you’re seeing a very small part of a very large site.

Here are a few quick Craigslist facts to help put things in context:

With this kind of volume, Craigslist has an advantage that traditional, ad-based competitors such as newspapers don’t – they have a massive network of actively engaged users.

Newspapers and even other online media reliant on ad revenue depend largely on a passive following to engage. People have to come to them for other reasons in order to access the provided advertising or service. Craigslist users are actively engaged – people seek it out to find whatever they’re looking for. That means that they have a huge community at their fingertips.

So how does Craigslist make money using little more than its users? They charge, of course!

Now, I know what you’re thinking – how does Craigslist make money from charging when they’re free to use? It turns out, they don’t charge for everything. In fact, they charge for very little, and they only do it in a few places.

Let’s Look At The Numbers

Craigslist has taken that massive community and looked at where it’s most active, both in terms of what regions postings are coming from and what people look for most on the site, and they use that to figure out where to levy small fees that have turned into big money. 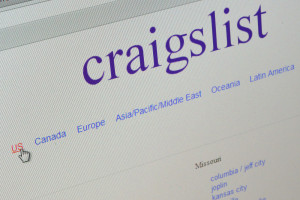 To start they took their largest housing market, New York City, and started charging a $10 flat fee for apartment listings. A landlord will make that up in no time between application fees, deposits, and eventual rent, but consider the fact that there are 2,184,297 rental units in New York according to a 2014 study from the New York City Department of Housing Preservation and Development.

Assuming 10% of those list on Craigslist annually, that means that about 218,430 apartments are paying a $10 fee to the company, totaling just over $2 million revenue.

That doesn’t reach anywhere near the reported hundred million, though, so how does Craigslist make money big enough to report the kind of cash speculators claim it has?

They adapted the New York model to fit the job market. In San Francisco, a city where the average salary is $78,000 (a full 35% above the US national average), Craigslist has levied a $75 fee on job listings. Bonus for seekers in the area – this fee serves as a means of quality control, since scammers are less likely to pay.

They also charge a $25 flat fee for job postings in a small fraction of its biggest US local markets. This is where things really start to add up. Remember those 100 million classified ads they post each month? About 2 million of them are job ads.

Let’s assume 1% of those are from areas where a fee is charged to post. That would be around 20,000 job postings monthly that are bringing in money. Forget San Francisco for a minute and pretend those are all a $25 flat posting fee. That’s $500,000 a month, which translates into $6 million a year.

This is a simple estimate based off of demonstrative percentages, but it shows how charging very small fees in very small, targeted locations in their marketplace has netted Craigslist some major cash.

That’s just the location-based data, too. How does Craigslist make money based on services offered?

At this point, it shouldn’t be a surprise that they don’t do anything more than charge a small fee to post within a very specific service category. For anything that falls under the category of “therapeutic services,” $10 is charged for each ad, anywhere in the US. Things like massages, acupuncture, acupressure, and anything else you might associate with a day spa would fall under that category.

$5 fees are imposed for any tickets by-dealer sales in the US, and the same amount is charged for any cars/trucks by-dealer ad in the US. It’s a simple, straight-forward, highly affordable fee structure that still allows Craigslist to take in big bucks.

How Does Craigslist Make Money By Putting People Above Profit?

In a nutshell, we’ve answered the question of “how does Craigslist make money? ”But for all of that, the website isn’t actually an exceptionally profitable company; at least not in the typical sense.

When confronted with the questions of both “how does Craigslist make money” and “why isn’t Craigslist focused on making more?” president Jim Buckmaster has said repeatedly that generating a profit isn’t the company’s goal.

Craigslist is a company with its roots in connections – personal, professional, commercial, and whatever else its users want. After all, when it started in 1995, it was an e-mail list of events in its hometown of San Francisco. It’s always been about connecting people and bringing them together in ways that are meaningful to the community it serves.

Today, the company still holds true to that, and to that end, while they make big money, they’ve never truly been driven by it. As it turns out, that’s done wonders to help increase their profitability.

Consider a few unique things about Craigslist, and you’ll get a much clearer answer to the how does Craigslist make money question:

First, think about the website itself. It’s clean, minimal, and hasn’t had a major facelift in years. You know what that means? They don’t have to employ a team of web designers to constantly keep things up to date and functional.

Now think about the fact that they’re ad free. That keeps things low-stress and straight-forward for us users, but you know what else that does? It spares the company the cost of taking on a team of marketers, account managers, and other specialists that would be required to keep up with advertisers.

We’ve talked about the company’s fee structure, but when you’re wondering “how does Craigslist make money?” it’s important to remember one other thing: they keep their overhead low. Incredibly low.

The Craigslist team is around 30 people, and they’ve made it clear that they have no intention of expanding. That means that a company with a 13 language, 70 country, 700 metro area presence has a staff the size of your local fast food burger joint.

Since Craigslist revenue has always been about covering operating expenses first, it’s safe to say that the company’s employees are probably doing pretty well for themselves, which is a smart investment on Craigslist’s part.

By investing in a small, quality team, they’re keeping personnel costs lower than they would by expanding the team but not being able to offer as much to each employee. That’s not say Craigslist is a massively altruistic company. It simply means that the company is focused more on what it’s doing than what it’s making.

They also don’t have technology partners to help in delivering their service. Instead of spending money on tech, they use almost entirely open-source software, which Buckmaster has presented as not only keeping costs down, but being of greater benefit to them, since it regularly gets progressively better.

It’s a simple model, but in Craigslist’s case, keeping things simple is the easiest way to not only keep things working well for their staff and their users, but also the easiest way for them to make some big bucks.

What It All Means For Other Companies

Asking “how does Craigslist make money” is a simple enough question, and it’s one that a lot of their competitors wondered for a long time, too. For them, though, it isn’t just a matter of curiosity.

How does Craigslist make money was on the tip of every newspaper’s tongue over the past decade. By allowing for free ad and no advertisers, Craigslist has taken away two major revenue streams, especially for the small-town and hyper-local papers where things like apartment and job classifieds used to be the most valuable.

Buying classified ads in the local paper was an invaluable means of spreading information for the public, and a great little revenue stream for the publishers. To that end, technology, as a whole seems to be driving the medium further toward obscurity. In fact, a study by the Newspaper Association of America found revenues generated by classifieds have dropped from $19.6 billion to $6 billion between 2000 and 2010.

While all classified websites have done their part when it comes to the newspaper industry, Craigslist poses a special threat, since it not only do they not charge for classifieds, they’re ad-free. This gives users a cleaner, more convenient experience, and one that by the numbers, they’ve flocked to in the millions.

The newspaper business model does not allow it to operate ad free, at least not at anywhere near the level they would with advertisers. As more classifieds move to Craigslist, specifically, newspaper advertisers are seeing a lower return on their print-based investments, without a competitor to turn their attention toward.

That leaves advertisers wondering not only “how does Craigslist make money” if they’re not going to take sponsor dollars, but how the advertisers, themselves, are going to be able to recoup the money they invest in advertising if one medium is quickly disappearing and the one taking its place doesn’t have any interest in advertisers’ content.

This has forced advertisers to look into entirely new methods of advertising and distribution of funds, leaving newspapers sorely lacking two revenue streams that they once depended on. To the same extent, Craigslist has virtually wiped the need for online news classifieds, leaving publishers with almost no option to recoup the money lost by the company’s rise.

What It All Means For You

If you’re an individual Craigslist user, then the “how does Craigslist make money” question will have a much different impact on you than it did on print media. Since Craigslist does not have increased profits at its core, you’re not going to see advertisements pop up anytime soon.

And while they have expanded their fees (the charging to post classified for cars and trucks direct by-dealer is relatively new), you have to keep in mind how targeted those things are. The fees that they charge are nominal to the individual buying, and they cover very carefully selected sections of very carefully selected areas.

In fact, their newer fees have been targeted directly at businesses using their site. Dealers and ticket brokers are companies, not individuals. The same goes for job postings – that’s directed at companies looking for new employees, not a person simply looking for help.

Craigslist still has an ethos of connection at heart, and as an individual user, that means that their model puts greater emphasis on your experience. They keep things usable for the majority by upping or adding new charges for those who can afford it, according to their massive datasets. For the average user, Craigslist is staying free, minimal, and accessible.

So how does Craigslist make money? Simply by giving its users what they want, and maintaining a high volume of them while they’re at it. Craigslist is proof that a couple dollars here and there can add up to millions in no time.