Warning: mysqli_num_fields() expects parameter 1 to be mysqli_result, bool given in /home/customer/www/1800loanstore.com/public_html/blog/wp-includes/wp-db.php on line 3547
 3 Sneaky Ways for Making Money on YouTube
Skip to content
Financial Loans

In 1968, Andy Warhol, the American artist said, “In the future, everyone will be world famous for fifteen minutes.”

Is it me, or was this guy completely, totally, and utterly correct?

It seems like the future is now.  There was a time when you had to be in “the business” to be famous.  You had an agent, went to castings, had your likeness plastered on billboards and movie posters.  You were famous.

It was an elite crowd, the famous.  If people wanted your autograph, there had to be a good reason for it, and there usually was.  You were a singer, actor, or movie star.  Like I said, it was an elite crowd—not one easy to break in to.

You know what happened though right?  The 90s.  The Internet.  My Space kicked off our love of social media sharing sites followed by, Facebook, Twitter, and of course, the place where completely ordinary people can become stars—and millionaires: YouTube.

Created in 2005, this site allows plain Janes and average Joes to upload, view, share videos while becoming internet sensations in the meantime.  Well, lo and behold, the idea caught on and fast.  So fast, in fact, that the creators of YouTube were able to sell their site to Google in 2006.  Apparently Google saw a lot of potential in the video sharing site, because they had their offer on the table less than a year after YouTube’s launch.

But YouTube’s creators are hardly the only folks around who have made money simply by posting videos.  In fact, several hundred popular posters make easily in the 6 figures in a year, mostly from advertising revenue.  You see, videos that are monetized run ads you have to watch before you can watch the video.  For every 1000 unique ad views, the video owner gets paid. 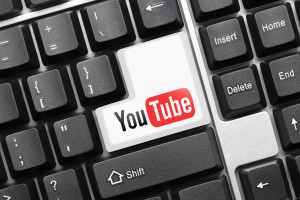 While getting 1000 views might be your dream come true, imagine how much money you could make, if your video really took off and had over a million views.  That’s like 100 paydays.

YouTube is responsible for turning humble, homemade videos like “Charlie Bit My Finger” into international superstars with over 800 million views.  In 2011 alone, the family earned over 100 thousand pounds from the video, enough to put a rather hefty down payment on a new home.

There are, of course, legitimate Hollywood celebrities that make big money from YouTube, in the form of posting their music videos.  In fact, it’s likely that if you even want to see a music video from your favorite artist anymore, you’re not going to be watching MTV, but logging in to your YouTube account.

But Hollywood celebs aren’t the only ones with big earnings.  There are YouTube stars that review products, open toys, read stories, tell funny stories, or just about anything else that can captivate an audience and earn those ad clicks.  The top five YouTube earners earn a combined $29.2 million and that’s annually.

So here’s the burning question: How can you make money off of YouTube videos?

Tip #1 – Be Someone Worth Watching

Let’s be real here.  You aren’t going to make a cent on YouTube if no one wants to watch your videos.  And while a pretty face has some pull, it’s really the content of your videos that keeps people coming back.  And that’s where you make money.

Since YouTube is set up in a format where you’re paid for every 1000 ad views, building an audience makes sense. While the exact amount you receive may vary, what’s most important is that you can get people interested enough to come back to see what you have to say, or even better—to subscribe to your channel.

So how do you build an audience?  There are a few main things you can do:

Great content is the meat and potatoes of your YouTube Channel.  It all goes back to our first point—find a niche and make it interesting.  You can try to compete with thousands of already established channels for product reviews (or whatever your special thing may be), or you can put your own spin on it.  Your own spin can be your personality, how you present yourself, if you have a special “catchphrase” or quirky way of wearing bright orange lipstick.  Whatever it is—set yourself apart from the herd—put the you in YouTube.

It’s called social media for a reason—people want to socialize.  So if you have people leaving comments on your videos, respond to them.  Get a discussion going.  Let people get to know you on a different level.  What about the inevitable negative comments?  Well, that’s really up to you.  Not responding is certainly an option and maybe the best one.  But unless the comments are flat out malicioius, can you see anything in them that’s true?  Step back and try not to take it so personally in order to see if you can take it as constructive criticism instead.  (If you do decide to reply, be nice.  People are watching you and determining your character).

When you’re building a following, you’re going to have to post often.  As in several times a week, if not every day. Prior visitors won’t come back if you aren’t offering anything new and it might be hard to find new followers if you aren’t enticing them on a daily basis.

Sounds like a lot of work, doesn’t it?  And that’s because it is.  Sure, those big money makers are having a blast and laughing all the way to the bank, but they are working.  You’re going to need a game plan.  Ideas of what you’re going to post, topic you want to bring up, setting up a background (if you need one), getting together your props.

Then, of course, there’s the actual recording of your video.  Can you be clearly heard?  How’s the lighting?  How many takes will you need to get everything right?

Finally, you’ll need to edit everything together to make it work.  This can be the longest part of the process, depending on how complicated your video is.  If you don’t have editing skills, it might be a good idea to get some—and you can find thousands of them on YouTube.

So what do all of the top earners on YouTube have in common?  Not much. And that’s precisely what makes them so successful.  Instead of trying to outdo a huge number of people in the same niche, these folks went above and beyond, so beyond, in fact that they are able to make hundreds of thousands of dollars a year—or much, much more.

Take for example one YouTube star, DisneyCollectorBr, whose videos consist of her opening children’s toys and explaining how they work (I’m not kidding).  That’s it.  You hear her voice and see her hands, but I have no idea if she ever shows her face in any one of her thousands of videos.

Now, how many people were doing that on YouTube when she started doing it?  My guess is hardly anyone.  Who knows if it took off right away, but even if it didn’t she still believed in her idea and kept pushing on.

Because she was able to think outside of the (toy) box, she’s brought home $5 million annually since she started in 2011.

There are all kinds of categories that are easy to think of: makeup, hair, video games, exercise, how-tos.  But the real gold comes when you can think of something completely different, yet it’s a thing that people see value in watching again and again.  So while “putting on makeup with your feet” is definitely different, it may not be the kind of long-term attention grabber that makes you a star or any money for that matter.

So you’ve found your special niche, you’ve got a good handle on what your content is going to be, and you have an overall plan (don’t even try to wing it—if you’re serious about this, you’ll have a solid plan going).  Now you have to set your account up so people can find it and the way you do that is with keywords.

Keywords are tags that let people (and YouTube) know what they can expect to see in the video.  YouTube uses the tags to categorize your video(s), so it’s important that you use these keywords wisely so when someone does a search for something similar to what your videos contain, they’ll be included among the search results.

If your video is about dancing, you’ll want to optimize your video’s search tags with keywords like “dance”, “tango”, or any other descriptive word that describes your dancing.  But don’t stop there, think about the audience you’re looking for like “teenagers”, “seniors”, or “couples”.  Other good keywords might be “easy”, “advanced,” or “for beginners.”

Put yourself into the shoes of someone doing a search.  What would you type into the search bar?  Think of all the possibilities of word combinations a search might contain.  Make sure you have those keywords tagged on your videos so people are able to see them in the search results and just like that you’ll have new views.

Ready to make some money?  Well, stop right there.  It’s not as easy as just uploading a video and watching the checks come rolling in—well not initially anyway.  YouTube has some pretty serious criteria when it comes to what can be monetized (this list is taken straight from the horse’s mouth—from YouTube):

If you can’t follow the guidelines, YouTube can shut down your money making abilities (insert sad face).

But let’s say you filmed a hilarious video of your dog.  Funny and pets seem like a good match for advertisers, so you’re fine there.  You’re the one who shot the video, so there’s no worry about someone claiming it for themselves.  You aren’t using any music in the video so you don’t have to worry about showing documentation.  And because you’re a great YouTuber, of course you always follow the Terms of Service and Community Guidelines.

You’re golden and hopefully your video will turn out to be too.

Many YouTube stars don’t make money because they’re beautiful or handsome, have fantastic bodies, or amazing teeth, but because they know how to work the system.  They understand the importance of creating consistent, high-quality and unique content, building an audience that wants to subscribe to their videos, making sure they’re tagging their videos properly, and following YouTube’s rules.

Everyone wants to make money on YouTube, but not everyone knows how to do that.  Some people aren’t willing to put in the hard work and the time, especially in addition to whatever they have going on in their “real” lives: full time jobs, children, dealing with illness, etc.

If you’re determined enough, motivated enough, and can organize yourself a plan to be successful, you’re already well ahead of the rest.  YouTube gives you the tools, but it’s up to you to use them.

In retrospect, Andy Warhol was just as right as he was wrong.  Many people get their 15 minutes of fame, but lots of them hold on to it a lot longer than that.